By Michael Holden and William James 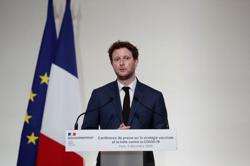 LONDON (Reuters) -Britain on Wednesday demanded a new deal to oversee post-Brexit trade involving Northern Ireland and warned the European Union that London would be justified in unilaterally deviating from a deal it struck with the bloc just last year.

The Northern Ireland protocol was agreed by Britain and the European Union as part of a 2020 Brexit deal, finally sealed four years after British voters backed the divorce in a referendum.

It sought to get round the biggest conundrum of the divorce: how to protect the EU's single market but also avoid land borders between the British province and the Irish Republic, the presence of which politicians on all sides fear could fuel violence largely ended by a 1998 U.S.-brokered peace accord.

The protocol essentially required checks on goods between the British mainland and Northern Ireland, but these have proved burdensome to business and an anathema to "unionists" who are fiercely supportive of the province remaining part of the United Kingdom.

"We cannot go on as we are," Brexit minister David Frost told parliament.

He said there was justification for invoking Article 16 of the protocol which allowed either side to take unilateral action to dispense with its terms if there was an unexpected negative effect arising from the agreement.

"It is clear that the circumstances exist to justify the use of Article 16. Nevertheless ... we have concluded that is not the right moment to do so.

"We see an opportunity to proceed differently, to find a new path to seek to agree with the EU through negotiations, a new balance in our arrangements covering Northern Ireland, to the benefit of all."

Reuters exclusively reported on Monday that Britain was considering such a threat.

Frost said Britain wanted a new "balance", detailed in a command paper, which meant governance of the accord was no longer policed by EU institutions and the European Court of Justice, and a "normal treaty framework" which was "more conducive to the sense of genuine and equitable partnership".

"These proposals will require significant change to the Northern Ireland protocol," Frost said. "We do not shy away from that, we believe such change is necessary to deal with the situation we now face.".

Even though customs officials have so far applied a light-touch approach to checking goods entering Northern Ireland from Britain under the protocol, major retailers have said they have struggled to cope with the situation and might need to shift supply chains from the United Kingdom to the EU.

Frost called for a "standstill period" which would maintain grace periods already in place with a freeze on existing legal actions.

Britain unilaterally extended a grace period for the implementation of full checks due to begin in March covering shipments of chilled meat products, and the EU later agreed this could be extended until the end of September to end a dispute dubbed the "sausage war".

The introduction of full customs checks could become incendiary one of country's biggest retailers Marks & Spencer said on Wednesday as they led to price rises and some products failed to get through due to paperwork checks.

M&S said it had struggled to get goods into Ireland and France since Britain formally left the EU's single market at the start of the year due to the amount of paperwork required, and Northern Ireland would suffer a similar fate.

There has also been disturbances among unionist communities in Northern Ireland and pro-British paramilitary groups told Prime Minister Boris Johnson in March that they were temporarily withdrawing support for the peace agreement due to concerns over the Brexit deal.