By Johan Ahlander and Anna Ringstrom STOCKHOLM (Reuters) - A snap election looked increasingly likely in Sweden on Thursday after the Liberal Party said it would not help restore a Social Democrat-led government after Prime Minister Stefan Lofven lost a no-confidence vote in parliament.

Lofven was the first Swedish prime minister to lose such a vote, held on Monday after the Left Party withdrew its support for the government over a planned easing of rent controls.

He has a week to resign or call a new election and is holding talks to try to keep in power his minority coalition, which was forged with support from parties including the Liberals.

Liberal Party Leader Nyamko Sabuni said her party now wanted a right-of-centre government and that Lofven should step aside.

This would give the parliamentary speaker the chance to sound out whether the assembly would back another administration, possibly led by the opposition Moderate Party's leader, Ulf Kristersson.

"A vote for the Liberals is a vote for a centre-right government," Sabuni said in a statement on Facebook. "We should be able to find solutions ... if Stefan Lofven does not unnecessarily announce a snap election."

Opinion polls suggest a snap election may not break the political deadlock.

The Social Democrats did not immediately respond to a request for comment after Sabuni's statement. Finance Minister Magdalena Andersson urged the Liberals to think again and sign up for a new deal that would keep Lofven in power.

"A heavy responsibility rests on Nyamko Sabuni to carefully consider how we can avoid the political crisis we are in right now," Andersson told Swedish radio. 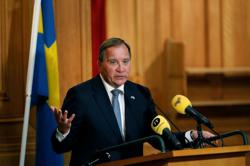