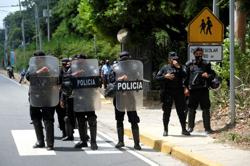 MANAGUA (Reuters) - Nicaraguan police detained opposition politician Arturo Cruz on Saturday, the second arrest of an opposition leader this week, escalating the battle ahead of November elections in which President Daniel Ortega seeks to maintain his grip on power.

Cruz, an academic who was Nicaragua's ambassador to the United States between 2007 and 2009, was detained at the Managua airport upon arrival from Washington, where he had been for a few days, his press team told Reuters.

The prosecutors offices said in a statement that Cruz was being investigated by the national police based on "strong evidence that he has attacked Nicaraguan society." It did not give details of possible charges against him or say whether he will remain in custody or under arrest.

Cruz, a former ally to Ortega, is a candidate for the Alianza Ciudadana or Citizen's Alliance, a coalition of right-wing parties supported by prominent businessmen, for the November presidential elections.

Leftist Ortega, 75, has been in power since 2007 and aims to be re-elected in November for the third consecutive time, after ruling in the 1980s.

The secretary general of the Organization of American States, Luis Almagro, demanded the release of Cruz.

"Manipulating security forces and the judiciary to imprison opposition candidates is unacceptable ... these actions are contrary to free and fair elections," Almagro said on Twitter.

On Wednesday, police stormed into the home of opposition leader Cristiana Chamorro and placed her under house arrest, sparking calls for a national strike in protest.

International organizations, including the Inter-American Commission on Human Rights and the Office of the United Nations High Commissioner for Human Rights, have accused Ortega's government of fabricating false accusations against opponents.