By Nadeen Ebrahim and Aidan Lewis

An aerial view of roads and houses near Nasr City, a suburb of Cairo, is pictured through the window of a plane, Egypt April 10, 2021. REUTERS/Amr Abdallah Dalsh

CAIRO (Reuters) - At weekends, Egyptian President Abdel Fattah al-Sisi is often driven out to a road construction site in Cairo where he is pictured surveying stretches of recently poured asphalt and being briefed by workers.

The highways and bridges he inspects are the most visible part of a big infrastructure push meant to galvanise Egypt's economy after decades of rapid population growth and unplanned building.

Led by the government and the military, it includes several new cities and one million low-cost homes and has helped pull Egypt through the economic shock of the pandemic and remain in growth last year.

After overthrowing Egypt's first democratically elected president in 2013 and pushing through painful fiscal reforms, Sisi is invested in the infrastructure drive's success.

But there is a cost. Some of those displaced by new roads are unhappy at losing their homes, others at seeing their neighbourhoods suddenly transformed. Analysts question how much difference the infrastructure boom can make while structural economic problems persist.

One area of intense activity is eastern Cairo, where new roads and bridges scythe through the urban sprawl towards a futuristic capital under construction in the desert and due to open this year.

In the Ezbet el-Hagana neighbourhood, drilling machines and diggers are laying out an intersection that cuts through cheap, informal housing, of which hundreds of units have been demolished to make way for the road.

When Sisi visited in February, he met ministers in front of unpainted brick housing blocks and discussed how half Egypt's population of 100 million lived in similar conditions. Afterwards, Sisi announced it would be renamed "Hope City".

But residents of Ezbet el-Hagana, many of whom moved from rural areas and built apartments and livelihoods, say they worry about the uncertainty.

Ali Abdelrehim, a 52-year-old father of four, said his house was not at immediate risk but others might suffer if authorities carry out the president's suggestion to widen the area's narrow streets.

"These changes worry people," he said, adding that business at his carpentry shop has slowed to a trickle as people stop work on homes that risk demolition.

Hosni Ali, a 34-year-old selling tomatoes from a donkey cart, said a storage room he rented was demolished because of the new roadworks. "Everyone here is scared ... everything is on hold," he said.

Across eastern Cairo and beyond, long-delayed road projects are racing ahead. As much as 1.1 trillion Egypt pounds ($70 billion) will be spent on transport in the decade to 2024, one third of that on roads and bridges, the transport minister has said.

Officials present the road building as part of efforts to develop informal areas across Egypt, connecting them to transport networks and basic services. They say those displaced will be compensated or resettled.

Some of those moved from Ezbet el-Hagana have been allocated furnished housing in Ahlina, a new district on Cairo's outskirts with a youth centre and playgrounds, and residents say conditions are good. But they have to pay rent and some have lost access to work.

"The problem is money, and life is expensive," said 75-year-old pensioner Sabri Abdo, whose son is a motor rickshaw driver. "Before this I lived in my own property and didn't pay rent. No one knows my son here, so things aren't working for him like they were over there."

The east Cairo governor's office, which oversees the area, was not available for comment.

The road building surge – social media posts dub Egypt "the republic of roads and bridges" – has triggered disquiet for other reasons.

Bridge and road building near the pyramids, around Cairo's "cities of the dead" where people live among old family tombs, and in the genteel neighbourhood of Heliopolis, has alarmed conservationists.

Commuting in and out of Heliopolis has become quicker but the character of the neighbourhood had changed for residents, said Choucri Asmar, head of volunteer group Heliopolis Heritage Foundation.

Asked for a response to complaints about the road and bridge programme on TV earlier this year, Sisi said no sector – including health, education, agriculture and manufacturing – was neglected.

"We need to do this so we can make people's lives easier, so we can reduce the amount of lost time, people's stress and the fuel being used causing more pollution," he said.

A World Bank study in 2014 estimated the costs of congestion in greater Cairo at 3.6% of Egypt's gross domestic product, far higher than some other big cities – though it warned that building more roads and bridges would not solve the problem.

While tens of billions of dollars are being spent on roads in eastern Cairo, the new capital in the desert and a summer capital on the north coast at El Alamein, roads elsewhere are often under-maintained, mass transit limited and public services patchy.

Like other motorists, Hesham Abu Aya, a 51-year-old taxi driver with three daughters, said new roads had eased the traffic crisis but he had to pay 7,500 Egyptian pounds ($480) to fix his car after hitting a pothole.

"If I want the state to spend on something other than bridges and roads, it would be healthcare," he said.

Egypt suffers from lack of research and development and barriers to private sector expansion, said Yezid Sayigh, a senior fellow at the Carnegie Middle East Centre. "Behind all the investment in real estate or in infrastructure, there's very little investment in the rest of the productive economy."

Those with a record in the sector tend to get contracts from military and other state agencies directing the infrastructure drive and can secure financing from banks, said Shams Eldin Yousef, Chairman of Al-Shams Contracting Company and a board member of Egypt's construction federation.

His company has picked up business through the road projects but he wonders how long the boom will last.

"If a wheel that is moving at this speed and on this scale stops, it will be a problem," he said. 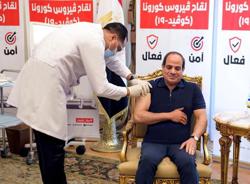