Baerbock said on Monday she would run to become chancellor at the Sept. 26 election, the first time the left-leaning ecologist party has sought the top job in its 40-year history.

The Civey poll of 1,500 executives for WirtschaftsWoche magazine, conducted on Tuesday and Wednesday, showed 26.5% favoured Baerbock for chancellor, ahead of Christian Lindner of the business-friendly Free Democrats (FDP) on 16.2%.

Armin Laschet, who saw off a challenge from Bavarian rival Markus Soeder to clinch the conservative alliance's candidacy on Tuesday, followed on 14.3% support, with the Social Democrat's Olaf Scholz on 10.5%.

Some 32.5% of respondents were undecided.

Baerbock, 40, a former champion trampolinist and mother of two, has promised a "new start" with a focus on investing in education, digital and green technologies.

Baerbock has seen support for her party rise over the past year to within a few points of Laschet's conservative bloc, and one poll earlier this week showed the ecologists overtaking the conservative alliance.

Many conservatives are worried about their prospects without Merkel, who has led them to four consecutive victories but is stepping down after September's election. 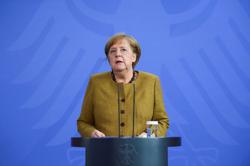