By Jake Spring and Lisandra Paraguassu

Speaking at a summit of world leaders called by Biden for Earth Day, Bolsonaro's pledge would move up the previous target for reaching net zero emissions by 10 years.

Bolsonaro had sought to closely align with the United States under former President Donald Trump, who did not criticize Brazil's environmental policy despite a major surge in Amazon rainforest deforestation and fires.

The Biden administration appears to have forced a realignment in relations by placing environment at the center of U.S.-Brazil diplomatic talks in recent weeks.

On Thursday, Bolsonaro pledged to double funding for environmental enforcement efforts in an apparent policy reversal.

The president had previously railed against environmental enforcement and further weakened environmental agencies, whose budgets and staff had already been dwindling for years.

It was unclear how Brazil would pay for the additional enforcement, with the 2021 budget nearly complete and Bolsonaro facing a deadline Thursday to sign it.

"This funding is being determined now on the occasion of the budget being approved, together with Congress," Environment Minister Ricardo Salles said in a press briefing following Bolsonaro's speech, without giving further details on the budgetary process.

Environmentalists said they were skeptical about Bolsonaro following through on the pledges, given his past criticisms of conservation efforts and calls to develop protected indigenous reserves.

Deforestation in Brazil's portion of the Amazon has soared under Bolsonaro, hitting a 12-year high in 2020 with an area 14 times the size of New York City destroyed.

Bolsonaro repeated a commitment made last week to end illegal deforestation by 2030, adding that it would reduce the country's greenhouse gas emissions by roughly 50% by that date.

Bolsonaro called for international support for Brazil's climate efforts, striking a slightly more conciliatory tone than in his past public remarks that told foreign nations to stay out of the country's environmental affairs.

"With this spirit of collective responsibility and common destiny, I invite you once again to support us in this mission," Bolsonaro said. 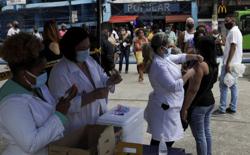