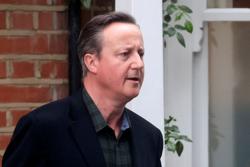 A series of inquiries have been launched into what access lobbyists have had to Prime Minister Boris Johnson's government after questions were raised about Cameron's attempts to get support for Greensill.

Cameron has denied breaking any code of conduct or government rules and the government has repeatedly said the outcome of his discussions on Greensill's proposals for access to a COVID-19 loan scheme were not taken up.

Johnson has launched an independent review to look at the allegations and several parliamentary committees are also launching inquiries into the role of lobbyists and ministers' interests in private companies.

Mel Stride, chairman of the Treasury Committee, told BBC radio he had written to Cameron and others to seek information to kick off its inquiry.

Asked if he would call Cameron, Stride said: "I think that is highly likely, yes, and also Lex Greensill, we will want to question both of them in respect of the lobbying issues here."

When questioned if they would summon Chancellor of the Exchequer Sunak, to whom Cameron sent text messages on behalf of Greensill, Stride said: "Definitely the chancellor, yes."