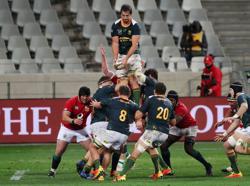 FILE PHOTO: Flames are seen close to the city fanned by strong winds after a bushfire broke out on the slopes of Table Mountain in Cape Town, South Africa, April 19, 2021. REUTERS/Mike Hutchings

Around 250 firefighters are battling to control the blaze, as strong winds ground helicopters normally used in firebombing sorties. A thick plume of smoke is obscuring visibility throughout the city centre.

Two firefighters sustained burn wounds and were hospitalised for treatment, officials said, as a change in wind direction saw the fire spread rapidly towards the city bowl overnight.

All schools in the Vredehoek area have been asked to evacuate, a disaster management spokeswoman said, adding that homes used to accommodate travelling cabinet ministers in Walmer Estate were also being cleared.

City officials confirmed one suspect was detained last night on Devil's Peak amid speculation that additional fires may have been started and whether the original fire was deliberately lit in an act of arson.