Locals protest against a new refugee camp on the island of Lesbos, during the visit of the European Commissioner for Home Affairs, Ylva Johansson, in the city of Mytilene, on Lesbos, Greece, March 29, 2021. REUTERS/Elias Marcou

ATHENS (Reuters) - Greece "can do more" to investigate allegations that it is pushing asylum-seekers, including children, back to Turkey, the European Union's top migration official said on Monday.

The United Nations refugee agency UNHCR has said it has received a growing number of reports in recent months suggesting asylum-seekers may have been pushed back to Turkey at sea or immediately after reaching Greek soil, or left adrift at sea.

"I am very concerned about the UNHCR report and there are some specific cases that I really think need to be looked into closer," Ylva Johansson, the EU's home affairs commissioner, said during a visit to the island of Lesbos.

"I think the Greek authorities can do more when it comes to investigating these alleged pushbacks."

"We strongly deny that the Greek coast guard has ever been involved in pushbacks," he said.

"We understand we are causing a loss of tens of millions of euros to smuggling networks, and that could have played a role in the kind of fake news we hear about the Greek coast guard," he said.

Mitarachi said independent investigations, including by the Greek judiciary and by the EU's border agency Frontex, had not found violations.

In 2015 Greece, and Lesbos in particular, was at the frontline of Europe's refugee crisis with nearly a million people, mostly Syrians fleeing war, arriving by boat from Turkey.

Numbers have decreased dramatically since the EU struck a deal with Ankara a year later and just over 16,000 people arrived in Greece last year, according to U.N. data. 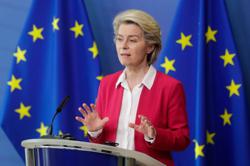 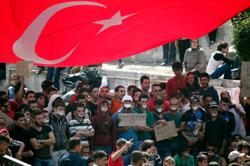