By Danny Ramos and Monica Machicao 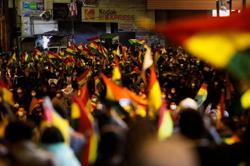 LA PAZ (Reuters) - The daughter of former Bolivian president Jeanine Anez raised concerns about her mother's health on Wednesday after authorities confirmed she was taken ill in prison but an ambulance called for her was later sent away.

Karina Figueroa, governor of the La Paz Womens’ Jail, said earlier that Anez, who was arrested on Saturday over allegations she helped foment a coup in the Andean nation, had been taken to hospital suffering from high blood pressure.

However, Reuters witnesses outside the prison said the ambulance later left empty and authorities confirmed the former president was being treated at the prison.

Carlos Limpias, director of the prisons service, said Anez was receiving all the care she required.

"At the moment her health is stable," he said. "She was taken ill this afternoon and given medication. It is worth noting that her lawyer was present and an ombudsman who can verify her state of health and that everything necessary has been done," he said.

Carolina Ribera said her mother suffered from hypertension for which she took medication and needed medical attention or could risk a stroke.

"I haven't seen her since Monday, since they took her to prison, and I'm desperate, anguished and worried about her," she told reporters outside the hospital. "Our mum is everything to us. What this government is doing is inhuman."

Anez, 53, and two of her former ministers were detained over the weekend on allegations they participated in a coup to oust longtime leader Evo Morales in 2019.

The current administration, run by Morales' socialist party under President Luis Arce, has sought the arrest of a number of former officials, military and civil leaders over accusations they conspired to oust Morales.

Anez denies the allegations and claims she is the victim of political persecution. 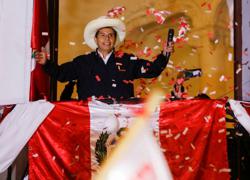