It's not vaccine diplomacy but global public service, says China of its aid to countries BEIJING: China has refuted claims that it is using the Covid-19 vaccine to gain geopolitical influence.

The country said it is instead realising its promise to provide vaccines as a global public service.

Chinese People's Political Consultative Conference (CPPCC) spokesperson Guo Weimin said the nation's intention is to "help the world fight the pandemic for the sake of mankind" and not as claimed.

Guo was speaking at a press conference on Wednesday (March 3) before the opening of the Two Sessions, the country's annual parliament proceedings.

As of late February, China has exported its vaccines to 28 countries while providing vaccine-related assistance to 69 nations.

Last Saturday, Malaysia received the first batch of China's CoronaVac, which was delivered in a 200-litre bulk and will be processed into 300,000 doses.

To a question on claims that China has prioritised the export of the vaccine instead of focusing on the welfare of its people, Guo noted that over 52 million doses of the vaccine have been administered to the Chinese.

The Two Sessions refers to the week-long meetings of the country's top legislature, the National People's Congress, and its political advisory body CPPCC, which will begin on Thursday (March 4).

This year's Lianghui, as the event is known in Mandarin, is especially significant as it is being conducted ahead of the country's governing party ‒ the Chinese Communist Party ‒ celebrating its 100th anniversary.

It also comes soon after the country announced its “complete victory” in the fight against poverty, lifting over 770 million people out of hardship.

One of the highlights of the event will be the review of the five-year economic and social development plan (2021-2025), under which the country has set out goals to upgrade its consumer service sector, create novel cooperation based on the free use of its renminbi currency as well as to push for innovation, smart and green development. 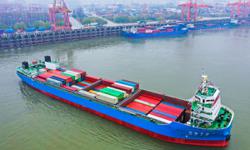