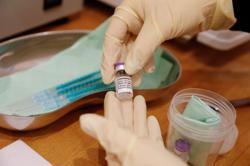 "As for the question of what the digital green passport could look like: we will submit a legislative proposal in March," she said in a video conference with German conservative lawmakers.