Citing multiple government sources, the newspaper said the Japanese government would refrain from calling the suspension of Official Development Assistance (ODA) a "sanction", and would try to persuade the military junta to reach a democratic solution through dialogue.

Asked about the report, Chief Cabinet Secretary Katsunobu Kato said "there was no truth to the report," but left open the possibility of a change in policy.

"Regarding economic assistance for Myanmar, we will carefully monitor the situation without prejudice and consider (the options)," Kato told a news conference.

Japan, which has long enjoyed close ties with Myanmar, has refrained from taking a hard stance against the junta, even as the Feb. 1 coup has drawn sanctions and condemnation from the United States and others.

Tokyo is a major donor to Myanmar and Japan's largest companies have been particularly aggressive in expanding business there in recent years, seeing it as Southeast Asia's last major frontier market. Japan also fears pushing Myanmar closer to China if it weakens its ties.

In a joint letter to Japanese Foreign Minister Toshimitsu Motegi on Thursday, human rights groups including Human Rights Watch and Justice for Myanmar renewed calls on Japan to pressure leaders of the coup to restore the democratically elected government and respect human rights. 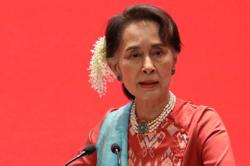