VIENNA (Reuters) - Iran is producing highly-enriched uranium faster than called for by the law under which it started the process of enriching to 20% fissile purity last month, diplomats and a report by the U.N. nuclear watchdog on Tuesday said.

As part of a recent acceleration of its breaches of its 2015 nuclear deal with major powers, Iran has begun refining uranium to 20% at Fordow, a site that was built in secret inside a mountain where the deal says Iran cannot enrich at all.

Until last month Iran had not enriched beyond 4.5% purity - above the deal's limit of 3.67% but still far below the 20% it achieved before the deal, or the 90% that is weapons-grade. Uranium is considered highly enriched as of 20%.

"They are producing 15 kg a month of uranium enriched to 20%. That is their production rate," a senior diplomat said.

Recent legislation that required Iran to start enriching to 20% stipulated that at least 120 kg (265 pounds) of uranium refined to that level be produced each year, which amounts to 10 kg a month.

A second diplomat said Iran was "slightly above" the target of 10 kg a month.

A quarterly report on Iran's nuclear activities by the U.N. nuclear watchdog on Tuesday obtained by Reuters said that as of Feb. 16 Iran had produced 17.6 kg of uranium enriched up to 20%, with the next level down being enriched between 2%-5%.

Iran's overall stockpile of enriched uranium grew by 524.9 kg to 2,967.8 kg in the quarter, far above the 2015 deal's 202.8 kg stockpile limit though still a fraction of the more than eight tonnes Iran had prior to the deal. 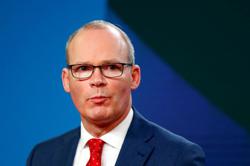