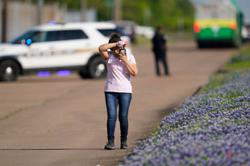 Cars line up to receive free cases of water after the city of Houston implemented a boil water advisory following an unprecedented winter storm, in an aerial photograph taken at Delmar Stadium in Houston, Texas, U.S., February 19, 2021. REUTERS/Drone Base

HOUSTON (Reuters) - President Joe Biden approved a major disaster declaration for Texas on Saturday as the state struggles with the fallout from a winter storm that killed at least two dozen people and caused widespread blackouts and water shortages.

Millions of residents in the United States' biggest oil and gas producer have had to contend with days of electricity outages, and nearly half of all Texans are still suffering from disruptions to their water service.

Lina Hidalgo, the top elected official in Harris County, which encompasses Houston, said on Friday authorities were reporting 10 deaths due to hypothermia. Officials said an accurate death toll will take time to establish.

The action by the Biden administration makes federal funding available to affected individuals, including assistance for temporary housing and home repairs and low-cost loans.

Biden is also weighing a trip to Texas to survey the federal response to the first new crisis to develop since he took office a month ago. The White House is working closely with Texas Governor Greg Abbott, a Republican who did not initially acknowledge Biden's November election win.

Abbott thanked the president for approving the major disaster declaration, saying in a statement that it was "an important first step." But, he added, individual assistance had only been approved for 77 counties, not all the state's 254 counties as he had requested.

FROM RESPONSE TO RECOVERY

With all the state's power plants back online, millions of Texans were finally able to turn on the lights and heat their homes again. However, outages persisted and more than 78,000 homes remained without electricity as of Saturday morning.

With the weather set to improve and temperatures expected to return to normal in the coming days, the main concern has shifted from power to water.

More than 1,200 public water systems have reported service disruptions, many of them leading to boil water notices, said Gary Rasp, a spokesman for the Texas Commission on Environmental Quality (TCEQ.) He said 14.3 million people in 190 counties were affected as of Saturday morning.

Toby Baker, TCEQ's executive director, said the agency will do a full review of the regulations governing the state's water systems.

"I'm not aware of ever having issues of this magnitude from a water system standpoint in the history of the state," he said at a press conference on Saturday. "We're going to take full advantage of this event to learn."

At his home in Houston, plumber Jay Farrell said he would "have rather gone through a hurricane than this freeze."

Farrell said he has not been able to take showers and for days has been using buckets of water from his hot tub to flush the toilet. As Texas shivered in the dark during the freeze, he said the temperature in his house dropped to 22 degrees Fahrenheit (minus 5.5 Celsius).

In Houston, officials struck a more optimistic tone after power was restored to most residents and with mass distributions of bottled water under way.

"Things are looking up... We are headed in the direction of normalcy," Hidalgo said in a video address on Friday. "Right now it's about shifting from response to recovery."

Meanwhile, Abbott said he was convening an emergency meeting with officials on Saturday to discuss the spike in energy bills received by many residents following the power outages.

The Electric Reliability Council of Texas (ERCOT), a cooperative responsible for 90% of the state's electricity, has come under fire after the power grid collapsed as demand spiked during the freeze.

Abbott lashed out at ERCOT last week, saying the corporation had told officials before the storm that the grid was prepared.

A lawsuit against ERCOT was filed on Friday in Nueces County court in Corpus Christi alleging the council failed to heed warnings and take action to address weaknesses in the power infrastructure.

In a statement on Friday, Paxton said the companies "grossly mishandled" the weather emergency, and vowed to "get to the bottom of this power failure."

(Reporting by Callaghan O'Hare in Houston; Additional reporting by Timothy Gardner and Trevor Hunnicutt in Washington, and Maria Caspani in New York; Writing by Maria Caspani; Editing by Matthew Lewis and Daniel Wallis) 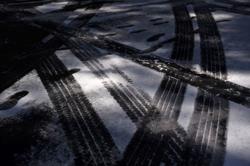