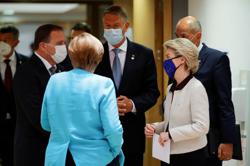 FILE PHOTO: Kremlin critic Alexei Navalny, who is accused of slandering a Russian World War Two veteran, is seen inside a defendant dock during a court hearing in Moscow, Russia, Russia February 16, 2021, in this still image taken from video. Press Service of Babushkinsky District Court of Moscow/Handout via REUTERS

MOSCOW (Reuters) - Russia's justice minister on Wednesday dismissed as "unlawful" a European Court of Human Rights ruling demanding the release of Kremlin critic Alexei Navalny, and accused the court of meddling in the Russian judicial system.

The Strasbourg-based court (ECHR) said it had ruled on Tuesday to "indicate to the Government of Russia" that it should with immediate effect free Navalny, whose arrest and jailing have sparked anti-Kremlin protests in Russia.

The ECHR, the international court of the Council of Europe, Europe's main human rights forum, said its decision to demand Navalny's release was motivated by a possible risk to his life.

It said in a statement that information provided by Russia - a member of the Council of Europe - about the conditions in which Navalny was being held had been contested by the opposition politician.

"This demand is baseless and unlawful, because it does not contain any reference to any fact or any norm of the law, which would have allowed the court to take this decision," Russian Justice Minister Konstantin Chuychenko said.

He was quoted by Russian news agencies as saying the decision was an unprecedented degree of meddling in the work of the Russian court system and that the demand was impossible to fulfil, as it had no basis in Russian law.

Russia passed a law last year giving its national legislation precedence over international treaties and rulings from international bodies in cases when they conflict with the Russian constitution.

Navalny's allies had earlier published a letter from a member of the court containing its decision which a Navalny ally, Leonid Volkov, said was binding.

Navalny, 44, was detained after returning to Russia from Germany last month and jailed on Feb. 2 for violating the parole terms on what he says was a politically motivated charge.

He had been treated in Germany for a poisoning with what many Western countries say was a nerve agent in Siberia last August, and has blamed the attack on Russian President Vladimir Putin.

The Kremlin has dismissed Navalny's accusations and questioned whether he was poisoned.

Several Western countries have called for his release and said they could impose sanctions against Russia over the case.

Navalny's lawyers could not immediately be reached for comment. 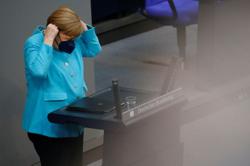