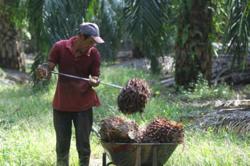 CHICAGO, Jan. 19 (Xinhua) -- Chicago Board of Trade (CBOT) agricultural futures fell across the board on Tuesday, led by soybean.

U.S. wheat futures pull back as Russia has not yet signed the export taxes, while corn and soybean futures are enduring a corrective break with the weekend rains helping to stabilize Argentine crops, Chicago-based research company AgResource noted.

Weather forecast shows limited rainfall will occur across Argentina over the next five to six days before showers return to Santa Fe and Corrientes on Monday. The southern half of the Argentine crop areas will stay dry for the next 10 days. Rainfall totals in Northern Brazil will be just 50 percent to 70 percent of normal with acute drying noted over Northeastern Brazilian crop areas.

AgResource holds that a correction was needed following the USDA January Report which caused futures to become technically overbought. It stays bullish, holding March corn is unlikely to fall too far below 5.20 dollars and March soybeans too far below 13.85 dollars, and March wheat has support below 6.35 dollars.