The consignment of CoronaVac vaccine will be packaged and labeled at Butantan's facilities pending regulatory approval. Butantan said it expected Sinovac to publish efficacy results from its vaccine trials by Dec. 15.

Brazil's Senate later on Thursday approved a presidential decree that appropriates 2 billion reais (288.67 million pounds) to buy the vaccine being developed by AstraZeneca and Oxford University. The lower chamber did so on Wednesday.

The funds will go to the federal biomedical center Fiocruz to buy and later produce the British vaccine in Brazil.

Earlier on Thursday, Doria had said the state would receive 6 million doses of the Chinese vaccine this month, with another 40 million doses by Jan. 15.

President Jair Bolsonaro, who many expect to be challenged by Doria in the 2022 presidential election, has long criticized the Sinovac vaccine.

Doria, meanwhile, has accused the Anvisa health regulatory agency of becoming overly politicized after a surprise suspension of the Sinovac trial due to the suicide of a volunteer. The trial was restarted but the president called the halt a "victory" for Bolsonaro.

Asked if the federal government would buy from Sinovac, he said: "This ministry is interested in any vaccine registered by Anvisa that has shown itself to be effective and safe." 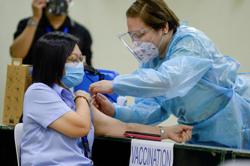