WASHINGTON (Reuters) - The United States on Thursday imposed fresh Iran-related sanctions, blacklisting an entity and an individual as Washington continues to ramp up pressure on Tehran during U.S. President Donald Trump's final months in office.

The U.S. Treasury Department in a statement said that it had slapped sanctions on Shahid Meisami Group and its director, accusing the entity of being involved in Iran's chemical weapons research and linked to the Iranian Organization of Defensive Innovation and Research, which is blacklisted by Washington.

The move comes days after the killing of the Islamic Republic's top nuclear scientist last week. Iran's supreme leader promised on Saturday to retaliate for the killing, raising the threat of a new confrontation with the West and Israel in the remaining weeks of Trump's presidency.

"Iran’s development of weapons of mass destruction is a threat to the security of its neighbors and the world,” Treasury Secretary Steven Mnuchin said in the statement.

"The United States will continue to counter any efforts by the Iranian regime to develop chemical weapons that may be used by the regime or its proxy groups to advance their malign agenda," he added.

Thursday's action freezes any U.S. assets of those blacklisted and generally bars Americans from dealing with them. The Treasury also said that financial institutions that facilitate significant transactions with the targeted individual and entity run the risk of being hit with U.S. sanctions.

U.S. Special Envoy for Iran Elliott Abrams last week said the Trump administration would continue to tighten sanctions on Iran during its final months in office, with sanctions related to arms, weapons of mass destruction and human rights expected through December and January.

President-elect Joe Biden, set to take office on Jan. 20, has said he will return the United States to the Obama-era deal if Iran resumes compliance. 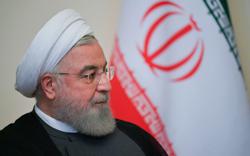