Ethiopia's Prime Minister Abiy Ahmed addresses the legislators on the current situation of the country inside the Parliament Buildings in Addis Ababa, Ethiopia February 3, 2020. REUTERS/Tiksa Negeri

ADDIS ABABA/NAIROBI (Reuters) - Ethiopian Prime Minister Abiy Ahmed's government will protect civilians in the northern region of Tigray, he told African peace envoys on Friday, a day after he announced the military was beginning the "final phase" of an offensive there.

But a statement issued after their meeting made no mention of talks with the Tigray People's Liberation Front (TPLF) to end fighting that began on Nov. 4.

The government had given the TPLF until Wednesday to lay down their arms or face an assault on Mekelle, the regional capital of 500,000 people, raising fears among aid groups of extensive civilian casualties.

In a statement issued after Abiy met the African Union envoys - former presidents Ellen Johnson-Sirleaf of Liberia, Joaquim Chissano of Mozambique and Kgalema Motlanthe of South Africa - the prime minister's office said the government was committed to the "protection and security of civilians".

The statement thanked the envoys for imparting their "wisdom, insights, and readiness to support in any way they are needed" and did not mention any plans for further discussions with them.

The envoys had been sent to Addis Ababa to help mediate in the conflict, something that Abiy had already made clear he did not want.

The prime minister, who won last year's Nobel Peace Prize for ending a two-decade standoff with Eritrea, has said he will not talk to TPLF leaders until they are defeated or give up.

Thousands of people are already believed to have been killed following air strikes and ground fighting. The United Nations estimates 1.1 million Ethiopians will need aid as a result of the conflict.

The bloodshed has sent shockwaves through the Horn of Africa. More than 43,000 refugees have fled to Sudan. TPLF rockets have hit the capital of neighbouring Eritrea.

Reuters was unable to reach the TPLF for comment on Friday morning, but two diplomats said fighting raged in several areas outside Mekelle. A resident of Mekelle said the city itself was quiet on Thursday night. The United Nations says 200 aid workers are in the city.

With phone and internet connections shut off to the region and access to the area tightly controlled, verifying claims by all sides has been impossible.

Finance Minister Ahmed Shide said on Thursday the government was trying to make people in the city aware of the military operation.

"We have made the people of Mekelle to be aware of the operation by deploying military helicopters and dropping pamphlets in Tigrinya and also in Amharic so that they protect themselves against this," he told France24.

Kenneth Roth, executive director of Human Rights Watch, said such efforts were not akin to protecting civilians from harm.

He also said on Twitter that "with evidence mounting of atrocities committed by both sides in Ethiopia's Tigray province, it's essential to send in international investigators now".

Rights investigators and civilians fleeing the conflict say fighters from both sides, including civilian militias supporting more formal security forces, have carried out mass killings. Both the government and the TPLF deny their forces were involved.

Abiy's office said on Thursday that authorities were opening a humanitarian access route, but the U.N. said it had no information on that and the region was blocked to aid groups.

Tigrayans, who make up about 6% of Ethiopia's 115 million population, dominated the government until Abiy took power two years ago.

Abiy pledged to unite Ethiopians and introduce freedoms after years of state repression that filled jails with tens of thousands of political prisoners. His government also put senior Tigrayan officials on trial for crimes such as corruption, torture and murder. The region saw those trials as discrimination.

Abiy’s reforms created more political space but also lifted the lid on long-repressed tensions over land and resources. In September, before the Tigray hostilities began, the U.N. migration agency IOM said conflict had displaced more than 1.2 million Ethiopians around the country.

Abiy accuses Tigrayan leaders of starting the war by attacking federal troops at a base in Tigray three weeks ago. The TPLF say the attack was a pre-emptive strike.

Tigrayan forces have large stocks of military hardware and number up to 250,000 men, experts say, while the region has a history of guerrilla resistance. 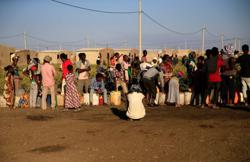