By Colin Packham and Renju Jose 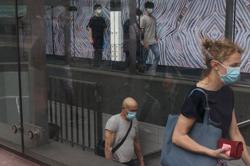 SYDNEY (Reuters) - Australia will lift more internal state border restrictions in a boost for tourism as new coronavirus infections slow to a trickle, while the first vaccines could be available in March, a government minister said on Tuesday.

Queensland state, a popular holiday destination, will allow visitors next week from the country's two most populous states, New South Wales (NSW) and Victoria, after closing its borders in August.

NSW has since notched a month without any COVID-19 cases where the source is unknown and restrictions on arrivals from Sydney will be eased on Dec. 1, Queensland Premier Annastacia Palaszczuk said.

Residents of Victoria, previously the country's coronavirus hotspot, will also be welcomed if the state has no new cases on Wednesday, which would mark 26 days without community transmission.

"Queensland is good to go," Palaszczuk told reporters in Brisbane.

NSW and Victoria opened their border on Monday, while the South Australia-Victorian border opens fully next week, in welcome news for local airline companies, Qantas Airways and Virgin Australia.

Qantas said it will run more than 1,200 return flights from Victoria and NSW into Queensland in the run-up to Christmas.

The moves will please Prime Minister Scott Morrison who has pushed state leaders to relax some curbs to help revive the economy, which shrank 7% in the three months to end-June, the most since records began in 1959.

Looking further out, Health Minister Greg Hunt said Australia - which has agreed to buy nearly 34 million doses of AstraZeneca's COVID-19 vaccine - is increasingly confident it can complete a vaccination programme after the release of preliminary trial results.

"Our vaccine timeline is beginning to strengthen. The news from overseas is that we are on track for first vaccines in March," Hunt told reporters in Sydney.

AstraZeneca said its COVID-19 vaccine, cheaper to make, easier to distribute and faster to scale-up than its rivals, could be as much as 90% effective.

Australia has reported more than 27,800 cases of COVID-19 and 907 deaths since the pandemic began, but estimates there are fewer than 100 active COVID-19 cases remaining, mostly people in hotel quarantine.

Victoria said on Tuesday it had zero active cases for the first time in over eight months following a strict lockdown after daily infections peaked at more than 700 in early August.

Qantas, meanwhile, said it will insist in future that international travelers have a COVID-19 vaccination before they fly, describing the move as "a necessity".

"We are looking at changing our terms and conditions to say, for international travelers, that we will ask people to have a vaccination before they can get on the aircraft," Chief Executive Alan Joyce told broadcaster Channel Nine.

Australia closed its international borders in March and currently requires returning travelers from overseas to quarantine for two weeks.

In a political flare-up, NSW state premier Gladys Berejiklian revealed she broke local health protocols a week earlier by failing to self-isolate for two hours between taking a COVID-19 test and receiving the result, which was negative.

Berejiklian told the Today morning TV show she took the test because her voice was hoarse, with no other symptoms, and that she didn't change her schedule while she waited, drawing accusations from opponents of undermining public health messaging.

"The Premier voted in parliament after having a COVID test, before result came back," state opposition leader Jodi McKay wrote in a tweet.

"This is a reckless breach of health guidelines and another shocking lapse in judgement."