A banner reading "Yes to war business initiative" is placed on a railing in Zurich, Switzerland November 16, 2020. REUTERS/Arnd Wiegmann

ZURICH (Reuters) - Swiss voters decide on Sunday whether to ban the funding of arms makers, the latest anti-military referendum in the neutral country that hasn't fought an external war for 200 years.

Swiss banks have given loans and hold shares worth nearly $11 billion in companies like Lockheed Martin, Northrop Grumman and General Dynamics, according to a study by independent researchers Profundo.

The Swiss National Bank (SNB), UBS and Credit Suisse have the biggest exposure, the study said.

"An enormous amount of money comes from Switzerland into an industry which profits from death and destruction," said Julia Kueng, co-president of the Young Greens Party.

"How can a country which claims to be neutral profit from war material?"

The SNB opposed the initiative, which it said would create legal uncertainty and undermine the central bank's independence. UBS also rejected it, saying it did not directly or indirectly finance weapons already banned in Switzerland.

Credit Suisse referred Reuters to the Swiss Bankers Association. The association said the initiative would weaken Switzerland as a business location and unnecessarily restrict the SNB, pension funds, banks and insurance companies.

The Initiative Against the War Trade wants to ban the SNB and pension funds from holding shares in companies which generate more than 5% of sales from weapons and components. It would ban banks from lending to defence companies.

The vote is the latest to question Swiss links to the military. In 1989 voters rejected abolishing its army, while six years ago they turned down buying Gripen fighter jets.

The Group for Switzerland without an Army (GSoA) argues a proliferation of weapons fuels wars, and Switzerland could contribute to demilitarization through its outsized wealth management industry.

"These weapons have to be financed," GSoA secretary Nadia Kuhn said. "The banks in Switzerland manage about one quarter of global assets managed across borders. This gives Switzerland an opportunity to make a difference."

As well as investing in foreign companies, Switzerland also produces arms, and some companies will get loans from banks. Switzerland exported weapons worth 727.9 million Swiss francs to 71 countries in 2019, up from 510 million francs in 2018.

Switzerland bans the production and sale of nuclear, biological and chemical weapons as well as land mines and cluster munitions.

Industry group Swissmem estimates around 3,000 companies employing 50,000 people could be affected by the initiative, which it opposes. The Swiss government is also against it.

A poll this month showed 50% of respondents in favour and 45% against.

"Of course, we would all want to have a totally peaceful world. But this initiative wouldn't achieve that – no other countries are doing it. Instead this would lead to companies taking production out of Switzerland."

Among the companies affected would be Casram, which gets around 15% of its sales from the defence industry, selling parts to Saab for use in Gripen airframes.

"You cannot survive in Switzerland making just simple products, you need to make more complex articles," said Chief Executive Franco Puffi. "If we lose this market it's like cutting our legs off." 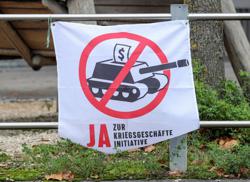 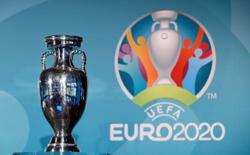