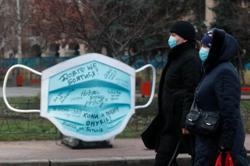 FILE PHOTO: Medical specialists wearing protective gear stand next to an ambulance outside a hospital for patients infected with the coronavirus disease (COVID-19) in Kyiv, Ukraine November 9, 2020. REUTERS/Gleb Garanich/File Photo

Maksym Stepanov said the new cases had taken the total number of confirmed infections to 525,176, with 9,508 deaths.

"This is a war, every day the virus takes the lives of Ukrainians," Stepanov told a televised briefing.

The daily infection tally began rising in September, leading the government to decide to impose a national lockdown at weekends to try to curb the spread of the virus.

But authorities in some cities have said they would ignore the government's order as they seek to avoid worsening the economic situation in the regions.

Prime Minister Denys Shmygal said on Friday the government decision was binding, and Stepanov said the new measures could help to preserve the country's medical system.

"If we reduce the spread of the disease in these two days (at weekends), we will significantly reduce the burden on our medical system," Stepanov said.

Weekend lockdowns will be in force from Nov. 14-30. They require the closing or restricting of the activity of most businesses, with the exception of grocery stores, pharmacies, hospitals and transport. 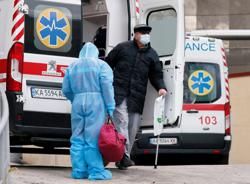