WASHINGTON (Reuters) - Democrats were projected to retain their majority in the U.S. House of Representatives in Tuesday's election.

Here are eight interesting races to watch, including several of the most closely fought contests:

Republican small business owner Marjorie Taylor Greene is a political newcomer who promoted QAnon in a 2017 video but later backtracked, saying it was not part of her campaign. She won a House seat in conservative rural northwest Georgia after her Democratic opponent dropped out.

Long-time Representative Collin Peterson, one of only two House Democrats who opposed both articles of impeachment against President Donald Trump in 2019, faces Minnesota's former lieutenant governor, Republican Michelle Fischbach. The district in rural western Minnesota voted strongly for Trump in 2016.

Representative Jeff Van Drew, who was elected to Congress as a Democrat in 2018 but became a Republican after voting against impeaching Trump, faces a strong challenge from Democrat Amy Kennedy. She is a former schoolteacher who married into the famous U.S. political family. The district in southern New Jersey includes Atlantic City.

Freshman Democratic Representative Xochtil Torres-Small has a rematch with Republican Yvette Herrell, who lost to her narrowly in 2018 and is endorsed by the conservative House Freedom Caucus' political action committee. The district covers southern New Mexico including part of Albuquerque.

Representative Joe Cunningham, who stunned Republicans in 2018 when he became the first Democrat to represent the coastal district in nearly four decades, faces Republican Nancy Mace, the first female graduate of the Citadel military college.

Conservative Republican Representative Chip Roy is being challenged by Wendy Davis, a Democratic former state senator who caught the national spotlight in 2013 by talking for over 11 hours to temporarily stop an anti-abortion bill. The central Texas district includes part of Austin. 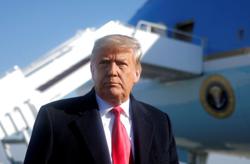