By Bai Lin and Unreguser 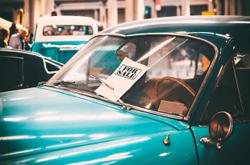 NAIROBI, Oct. 26 (Xinhua) -- The export of used vehicles from the industrialized north to developing countries has worsened air pollution while undermining action on climate change, says a report that was launched by the UN Environment Program (UNEP) in Nairobi on Monday.

According to the report titled "Used Vehicles and the Environment: A Global Overview of Used Light Duty Vehicles: Flow, Scale and Regulation," nearly 14 million second-hand vehicles were exported globally between 2015 to 2018, while Africa accounted for 40 percent of the imports.

"Cleaning up the global vehicle fleet is a priority to meet global and local air quality and climate targets," said Inger Andersen, the UNEP executive director.

"Over the years, developed countries have increasingly exported their used vehicles to developing countries, because this largely happens unregulated, this has become the export of polluting vehicles," she added.

The new UNEP report that was based on analysis of 146 countries finds that nearly two-thirds had weak regulatory tools that compromised quality and safety of used vehicles imported from Japan, Europe and the United States.

It finds that African countries imported 40 percent of used vehicles from 2015 to 2018 followed by countries in Eastern Europe, Asia Pacific, Middle East and Latin America at 24, 15, 12 and nine percent respectively.

"Developed countries must stop exporting vehicles that fail environment and safety inspections and are no longer considered roadworthy in their own countries, while importing countries should introduce stronger quality standards," said Andersen.

The UNEP report says that absence of regional and global conventions to regulate trade and flow of used vehicles was to blame for declining air quality in the global south alongside a spike in road accidents.

"Regulation is essential to ensure the quality of the vehicles and reduce urban air pollution and global climate emissions," says the report.

It proposes outright bans, fiscal incentives, labeling and awareness creation in order to reduce importation of second-hand vehicles by low and middle-income countries.

"Fiscal instruments can be an effective means to regulate the import of used vehicles," says the report.

"Examples are age-based taxation, progressive excise tax based on carbon emissions, or engine size, and exemptions for specific vehicles, such as hybrid electric and electric vehicles," it adds.

The report says that research combined with harmonization of laws and policies is key to ensure that only second-hand vehicles that meet safety standards are exported to developing countries.