BEIJING, Oct. 23 (Xinhua) -- The following is a summary of published science and technology news of China.

China's manned space program has entered the mission preparation stage with the selection of a new group of 18 reserve astronauts.

According to the China Manned Space Agency (CMSA), the reserve astronauts, including one female, have been selected recently from 2,500 candidates. Among them are seven spacecraft pilots, seven space flight engineers and four payload experts.

The China National Intellectual Property Administration and the European Patent Office will launch a two-year pilot program that enables Chinese patent applicants to designate the EPO as an additional option for international searches.

Researchers have developed a dataset for annual global soil respiration at a spatial resolution of 1 square km for the period between 2000 and 2014.

More than two-thirds of terrestrial carbon is stored belowground, and a significant amount of the atmospheric carbon dioxide assimilated by plants is respired by roots and microbes in soil, according to the research article published in the journal Science Advances. 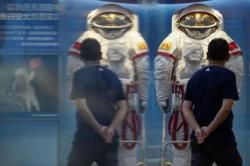