ROME, Oct. 21 (Xinhua) -- Italy's flagship air carrier, Alitalia, said Wednesday it was returning to the country's second-largest airport that it pulled out of early this month, though only for long-haul cargo flights.

Alitalia is in the process of a dramatic reorganization that will include scaling down its fleet and changing its name to ITA starting in 2021. The company is still struggling to emerge from the economic slowdown sparked by the global coronavirus pandemic, which slowed worldwide tourism arrivals to a trickle.

But the company never stopped running cargo flights, including a high-profile connection to China used in part to transport protective equipment including hospital uniforms, masks, and gloves early during the coronavirus outbreak.

Earlier this month, Alitalia announced it would halt passenger traffic to and from Milan's Malpensa Airport. For years, Malpensa has been the second largest airport in Italy, behind only Rome's Fiumicino Airport. Previously, Alitalia used Malpensa and Fiumicino as its main hubs.

Under its reorganization, the company will have a single hub in Rome, and it will serve Milan via the smaller Linate Airport, which is far closer to the city than Malpensa.

The withdrawal from Malpensa prompted criticism from nearby communities fearful of a loss of commerce.

But media reports Wednesday indicated that Alitalia will still have cargo flights utilize Malpensa for connections to North America and Asia. Press officials confirmed the news stories Wednesday when contacted by Xinhua.

After Alitalia's withdrawal of passenger flights, Malpensa will continue to be served by several European airlines and the airport will still be a focus airport for Low-cost airlines including Ryanair, EasyJet, and Blue Panorama. 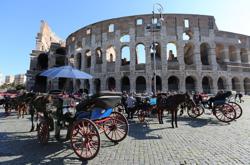