Total earnings for merchandise exports stood at 1,001.27 million U.S. dollars in September, a growth of 5.16 percent compared to 2019.

"I salute the entire export community, our resilient businesses and all employees in the export sector for this remarkable performance," EDB Chairman Prabhash Subasinghe said in an official media statement.

Exports to China continued to gain momentum while exports to Turkey and Britain also saw strong growth of 44.31 percent and 38.77 percent respectively.

Exports to the United States, the largest buyer of Sri Lankan goods had fallen 5.5 percent to 239.9 million U.S. dollars. Meanwhile, Africa was the fastest growing export region at 56.4 percent.

"Our businesses must continue to be resilient whilst facing the unknown and must have strong COVID-19 preventive measures in order to bring in the much-needed foreign currency for Sri Lanka," Subasinghe said.

The month of September saw strong growth in the export of coconut-based products and petroleum products, at a rate of 38.89 percent and 38.37 percent respectively.

However, export earnings from garments, which represent around half of annual export revenue, declined by 3.75 percent. Exports of the country's other staple, tea, grew by a marginal 3.3 percent.

According to official figures, total merchandise export earnings for January to September had fallen 16.5 percent to 7,401.48 million U.S. dollars due to a fall in shipments during COVID-19 lockdowns.

The government of Sri Lanka has said that it intends to diversify its export basket and target emerging markets in Asia and Africa. 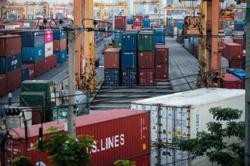 Kazakhstan to boost export of agricultural products to SCO markets