Over 1,000 students tested positive for coronavirus at UK's Newcastle University

Over 2,000 students in UK universities test positive for coronavirus: reports

LONDON, Oct. 8 (Xinhua) -- Britain's Newcastle University confirmed Thursday that 1,003 students and 12 members of staff have tested positive for COVID-19 in the past week, a big rise from the 94 students reported last Friday.

Meanwhile, there have also been 619 new cases among students at neighbouring Northumbria University, on top of the 770 new cases issued last week, local media reported.

Both universities have decided to move most of their teaching online in response to the major coronavirus outbreaks.

A Newcastle University spokesperson said: "This data represents students and staff within Newcastle city with the overwhelming majority of cases from social and residential settings. We expected to see cases rise in light of the increase in cases both locally and nationally."

Staff at Northumbria University have voted to ballot for industrial action and called on the vice-chancellor to resign, the BBC reported.

More than 1,000 students and staff at the University of Nottingham and University of Sheffield have been forced to self-isolate after testing positive for coronavirus.

To bring life back to normal, countries, such as Britain, China, Russia and the United States, are racing against time to develop coronavirus vaccines.

The British government's Chief Scientific Adviser Patrick Vallance has said that it is possible that some vaccine could be available in small amounts later this year, but it is more likely that a vaccine will be available early next year, although that is not guaranteed.

Over 2,000 students in UK universities test positive for coronavirus: reports 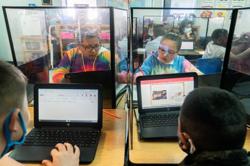