LONDON, Oct. 2 (Xinhua) -- Britain's Chief Negotiator David Frost said on Friday that outlines of a trade agreement with the European Union (EU) are "visible" while in some areas familiar differences remain as both sides concluded their ninth round of talks in Brussels.

Frost said in a statement that "constructive discussions" were conducted in a good spirit.

"In many areas of our talks, although differences remain, the outlines of an agreement are visible," he said. "This is true of most of the core areas of a trade and economic agreement -- notably trade in goods and services, transport, energy, social security, and participation in EU programmes."

State subsidy and fisheries remain two sticking points for the UK-EU talks. Frost said there has been some "limited progress" in level playing field but the EU need to move further before an understanding can be reached.

"On fisheries the gap between us is unfortunately very large and, without further realism and flexibility from the EU, risks being impossible to bridge," he said.

Frost's EU counterpart, Michel Barnier, said there are "positive new developments" on some topics such as aviation safety, social security coordination, and the respect of fundamental rights and individual freedoms.

However, he warned there is "a lack of progress" on some important topics like the protection of personal data, climate change commitments or carbon pricing, as well as persistent serious divergences on matters of major importance for the EU.

Britain and the EU have said a future trade deal needs to be agreed by mid-October to enable it to be approved ahead of Jan. 1, 2021. As the deadline looms, British Prime Minister Boris Johnson will speak to European Commission President Ursula von der Leyen on Saturday via a video-conference call to "take stock of negotiations and discuss next steps".

Both sides started the lengthy and bumpy post-Brexit talks in March after Britain ended its EU membership on Jan. 31, trying to secure a future trade deal before the Brexit transition period expires at the end of the year. If there is no deal in place, Britain will trade with the EU on terms of the World Trade Organization (WTO). 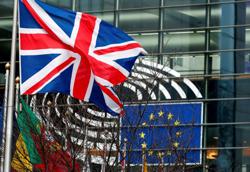