Forensic experts work at the scene of a stabbing attack near the former offices of French magazine Charlie Hebdo, in Paris, France September 25, 2020. REUTERS/Gonzalo Fuentes

PARIS (Reuters) - The stabbing of two people in Paris's rue Nicolas-Appert on Friday brought violence back to the street where, five years ago, Islamist militants killed 12 people in the offices of satirical magazine Charlie Hebdo.

Two journalists were wounded in Friday's attack in what Prime Minister Jean Castex said was a symbolic place, outside Charlie Hebdo's former offices.

Bullet-holes in railings along the short street lined with apartments and offices bear the scars of the earlier attack, in which the assailants stormed Charlie Hebdo's offices on Jan. 7, 2015.

A mural on the street shows the faces of the 11 Charlie Hebdo employees who were killed that day. The 12th victim was a police officer, shot dead near where one of two suspects in Friday's attack was arrested.

"I feel like I'm reliving past horrors," said a resident of a neighbouring street. "It's a never-ending nightmare."

"Once again, hatred, gratuitous hatred," he said. "I don't know when this is going to end."

Charlie Hebdo moved to a secret bunker after the 2015 attack. A journalist there said the magazine's employees were safe and that their security detail had not been bolstered.

The stabbings coincide with the start of a trial this month of 14 alleged accomplices in the 2015 attack.

Charlie Hebdo marked the trial's start by reprinting the cartoons of the Prophet Mohammad which incensed the Muslim world when most of them were first published by a Danish newspaper in 2005 and then by Charlie Hebdo a year later.

France has paid tribute to those slain in the years since the attack. This year, on the fifth anniversary, staff who survived stood on the street outside the magazine's former offices as a bugler played the Last Post.

"We will never lie down," editor Laurent 'Riss' Sourisseau wrote in Charlie Hebdo when it reprinted the cartoons of the Prophet Mohammad this month. "We will never give up." 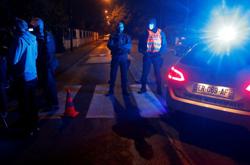