CHICAGO, Sept. 24 (Xinhua) -- Researchers at Washington University School of Medicine in St. Louis and Icahn School of Medicine at Mount Sinai have identified two antibodies that protect mice against lethal infections of influenza B virus.

The researchers obtained consent to take blood samples from a patient hospitalized with influenza B virus infection. They separated out antibody-producing cells from the patient's blood.

The researchers then generated antibodies from the cells and analyzed them. They found seven different antibodies that targeted neuraminidase. Two of the antibodies, 1G05 and 2E01, potently inhibited all neuraminidases from a diverse set of nine influenza B viruses.

Further, the two antibodies protected mice against a lethal dose of influenza B virus. The researchers infected groups of five mice with influenza B virus, and then treated them three days later with one of the two antibodies or a placebo antibody. The animals became sick and lost weight, but all of the mice treated with 2E01 and four of the five mice treated with 1G05 survived. In comparison, all the mice that received a placebo antibody died.

"Given their potency, I think these antibodies against influenza B, especially when combined with the antibody against influenza A, could form the basis for a new and more effective treatment for influenza virus infections, especially in children," said co-senior author Florian Krammer, a microbiology professor at Icahn School of Medicine at Mount Sinai.

Further experiments conducted showed that, like the influenza A antibody previously identified, the two influenza B antibodies neutralized neuraminidase by clogging up the part of the enzyme that cuts the virus loose from cells. Structural analysis of the interactions between the antibodies and the neuraminidases showed that each antibody interfered in a slightly different way, meaning that it would be especially hard for the virus to evolve drug resistance to both of them at once.

The researchers are in discussions with potential partners to develop the antibodies into a drug for influenza. They also have begun experiments using 1G05 and 2E01 antibodies as templates, with a goal of developing a universal flu vaccine that reliably elicits broadly protective antibodies.

Nearly all influenza viruses that sicken people can be classified into one of two groups: A and B.

Influenza B is the less common of the two and tends to show up late in the flu season. For unclear reasons, children are particularly vulnerable to it. During the 2019-2020 flu season, 187 children in the United States died of influenza, nearly two-thirds from influenza B.

The findings were published Thursday in the journal Immunity. 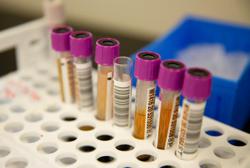 Analysis: What do waning COVID-19 antibodies tell us about immunity and vaccines?