In its monetary policy statement, Banxico said the five members of the bank's governing board unanimously agreed to cut the rate by 25 basis points to 4.25 percent, effective Sept. 25.

"Economic activity in Mexico, after contracting significantly in April and May, began to recover in June and July, although an environment of uncertainty and downside risks prevails," the bank said.

It was the 11th cut in the rate since August 2019, when Banxico began a cycle of monetary easing with inflation relatively under control, and an expected plunge in economic growth due to the pandemic.

Despite inflation rising to 4.1 percent through the first half of September, the forecast for the next 12 to 24 months remains at a target rate of 3 percent, said the bank.

However, going forward, the governing board "will take the necessary steps," taking into account the pandemic's "strong impact on productive activity, as well as the evolution of the financial shock we are facing," the bank said.

In its April-June 2020 Quarterly Report, published on Aug. 26, Banxico forecast an 8.8 percent to 12.8 percent contraction in economic growth this year due to the pandemic. 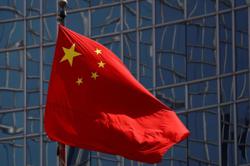 China will strive for economic growth minus the risks: Central bank governor

Inflation in Mexico stands at 4.09 pct annually in mid-October