NEW YORK (Reuters) - The U.S. presidential race is much closer than national surveys suggest, according to Reuters/Ipsos opinion polls in battleground states that show Democrat Joe Biden with only a slim lead over President Donald Trump in three highly competitive states and in a dead heat in three others.

The online state polls, conducted earlier in September and released this week, found Biden and Trump tied among likely voters in Florida and North Carolina. Biden led by 1 percentage point in Arizona, 3 points in Pennsylvania and 5 points in Wisconsin and Michigan.

All six are critical to determining who wins the Nov. 3 election, given their population size and potential to swing to either party. In each of the states, the difference between the two candidates was near or within the poll’s sampling error, meaning that neither candidate has a clear advantage.

Nationally, the latest Reuters/Ipsos conducted on Monday and Tuesday put Biden’s lead over Trump at 8 percentage points among all likely voters.

Click here to see a breakdown of the Reuters/Ipsos state polls: https://tmsnrt.rs/2G0bIcS

Taken together, the state and national surveys show the 2020 election may wind up with the same mixed result as 2016, with the Democrats receiving a majority of the votes but the Republicans winning the Electoral College and the White House.

While Biden has an early advantage in winning the national popular vote, Trump has nearly the same chances of winning the battleground states, and with them enough electoral votes for a second term.

The polls also found some important shifts in opinion this year within the U.S. electorate.

Biden, who emerged from a diverse field of Democratic presidential contenders on the promise that he was the most electable candidate, has been chipping away at Trump’s dominance over one of the largest voter blocs in America: whites without a college degree.

Trump does not appear to have been penalized by swing-state voters as much as he has been nationally for his response to the novel coronavirus pandemic. Swing-state voters are also more likely to see Trump as better than Biden at managing the U.S. economy.

CUTTING INTO TRUMP’S BASE

Support for Biden among non-college whites is up 10 percentage points nationally, when the results of Reuters/Ipsos polling this month are compared with support for Democrat Hillary Clinton in 2016 exit polls.

When asked whom they would support for president, 50% of likely non-college white voters said they were supporting Trump, while 41% were backing Biden. Four years ago, 61% of non-college whites voted for Trump and 31% for Clinton.

The latest Reuters/Ipsos national poll shows that 56% of the country disapproves of Trump’s response to the novel coronavirus pandemic, including 43% who “strongly” disapprove of his performance.

But Trump's handling of the coronavirus does not appear to be hurting him that much in a number of swing states, even with new cases on the rise in Arizona, Florida, Wisconsin, Pennsylvania and North Carolina.

In Florida, for example, likely voters are evenly split on the question of which candidate would have the better plan for dealing with the virus.

Trump is also more likely to be perceived in swing states as superior to Biden on the economy and job creation, a message that Trump has spent millions of advertising dollars reinforcing with voters this year in competitive states.

Trump’s biggest advantage on the economy was in Florida, where 51% of likely voters said Trump would be better at creating jobs, while 41% believed Biden would be better.

The Reuters/Ipsos state polls were conducted from Sept. 11 to 16. They gathered responses from 565 to 637 likely voters in Arizona, Florida, Michigan, Wisconsin, Pennsylvania and North Carolina.

The polls were conducted in English, with Spanish-language polls also available in Arizona and Florida. The results were weighted according to the latest population statistics for age, race, gender and education level so that the sample better reflected the demographics of each state. 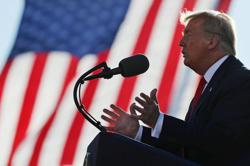