Acting Secretary of Homeland Security Chad Wolf is sworn in before the Senate Homeland Security and Governmental Affairs Committee during his confirmation hearing on Capitol Hill in Washington, U.S., September 23, 2020. Greg Nash/Pool via REUTERS

Wolf said the U.S. Department of Homeland Security (DHS) inspector general would interview people at the facility on Wednesday and Thursday, but cautioned that "some of the facts on the ground" did not back up the allegations.

"At this point, they are allegations, and we need to make sure that they fully investigate them so that all sides have a chance to be heard," Wolf said during a confirmation hearing before the Senate Homeland Security and Governmental Affairs Committee.

The claims were made by Dawn Wooten, a former nurse at the Irwin County Detention Center, in a complaint filed to the inspector general last week.

U.S. Immigration and Customs Enforcement (ICE) has denied the allegations, which have shocked people across Latin America, from where many U.S. immigrants hail, and caused an outcry among Democratic lawmakers. 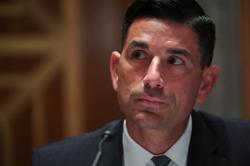