CAIRO, Sept. 18 (Xinhua) -- The number of confirmed COVID-19 cases in Iran surged to 416,198 on Friday. Meanwhile, a full nationwide lockdown took effect in Israel to contain the spread of the coronavirus.

Iran, the hardest-hit country in the Middle East region, reported 3,049 new cases, bringing the total number of infections to 416,198.

On the same day, Israeli Ministry of Health reported 27 new COVID-19 death cases, the highest daily rise of deaths since the outbreak of the pandemic in the country, bringing the total fatalities to 1,196.

The lockdown will last at least for three weeks, during which four Jewish holidays, including the Jewish New Year, will be marked. It includes a ban on moving more than one km away from home, as well as the closure of most shops, and all places of entertainment, culture, tourism and leisure.

The death toll from the coronavirus in Iraq rose to 8,408 after 76 fatalities were added.

Hassan al-Khalatti, a member of the health parliamentary committee, told the official Iraqi News Agency that the health ministry is planning to prepare makeshift hospitals with around 9,000 beds in Baghdad and other Iraqi provinces to enable current hospitals to return to their usual medical services.

The ministry also directed the provinces and the provincial health departments to build a central epidemiological hospital in each province in preparation for other possibilities during the coming period, Khalatti said.

The death toll from the coronavirus in the country rose to 7,377 after 62 new fatalities were added in the past 24 hours, Koca said, adding that the total recoveries increased to 264,805.

Turkish President Recep Tayyip Erdogan said the government had to boost the measures to curb the spread of COVID-19 as the daily infected cases in the country have been on the rise for the last month, while the country's biggest city Istanbul adopted alternate working hours for public employees.

The Moroccan government decided on the day to extend the implementation of the restrictive measures in Casablanca, the worst hit city, in order to curb the proliferation of the coronavirus.

The tally of recoveries in the UAE rose to 72,790 after 673 more patients have recovered from the virus and the death toll reached 403 with one more death.

Palestine reported 692 new coronavirus cases, taking the tally of infections in the Palestinian territories to 44,037, including 30,942 recoveries and 286 deaths.

A senior Palestinian official said that the health ministry will strengthen efforts to combat the spread of COVID-19 in the Palestinian territories amid a surge in daily fatalities and infections.

The total number of COVID-19 cases in Yemen's government-controlled provinces increased to 2,024, as two new cases were confirmed.

The death toll of the pandemic climbed to 585 in different areas of the government-controlled provinces, including the southern port city of Aden. So far, the pro-government health authorities have recorded 1,221 recoveries. 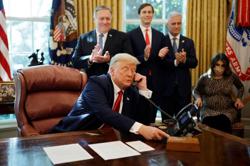