Crises pile up in Sudan as aid slows and prices soar

FILE PHOTO: Sudanese civilians wave their national flag as they gather at the freedom square during the first anniversary of the start of the uprising that toppled long-time ruler Omar al-Bashir, in Khartoum, Sudan December 19, 2019. REUTERS/Mohamed Nureldin Abdallah/File Photo

KHARTOUM/CAIRO (Reuters) - Saleha Adam had hoped things would get better after the ousting of Sudan's veteran leader Omar al-Bashir, and that more food and aid might start flowing into her ramshackle camp on the outskirts of Khartoum.

But a year and a half on, prices are still soaring. And an international package of support for the poorest households like Adam's has been delayed, leaving the government racing to stave off more economic turmoil.

"We heard about the (support) plan on TV," said Adam, who fled to Khartoum to escape fighting in Sudan's Nuba Mountains. But then nothing came of the plan. No cash arrived.

Crises are piling up for Prime Minister Abdalla Hamdok who took over after Bashir to head a shaky coalition with the military and become Sudan's first civilian premier since the 1980s.

There are the problems Hamdok inherited, including the loss of most of the country's forex-earning oil reserves with the secession of South Sudan in 2011.

There are the new disasters, chief of all the pandemic. Nile floods have also displaced tens of thousands.

Adding to that, many of the benefits that many hoped would come with Bashir's ousting - above all an end of Sudan's pariah status and isolation from world financial markets - have been slow to emerge.

A cash transfer plan - funded by donors and administered by the World Bank to help up to 6.5 million families - was meant to start on Sept. 1. The government had expected $400 million (310.22 million pounds) to start the plan this month, said Adam Harika, Hamdok's economic adviser.

But the World Bank told Reuters last week the cash plan was still "under design". "We are presently following up with donors on receipt of contributions as per their pledges," said a spokeswoman.

"The World Bank can pay its grant of up to $400 million only once they have sufficient donor funds," said a Western diplomat. "Each government has its own approval, even if they committed only $20 million, and this takes time."

While the United States said its pledge of $356.2 million will be sent by Sept. 30, Germany has only paid parts of its promised $150 million with the rest to be distributed by year-end, a government source said. The German ministry for international development said the funds were being paid gradually.

"WE ARE IN COLLAPSE RIGHT NOW"

Diplomats say donors are reluctant to hand over cash directly to the government because of transparency issues. They prefer channelling it through international organisations who take time to draw up specific aid programmes.

And the currency has been collapsing, weakening to 234 Sudanese pounds a dollar on the key parallel market from 140 in July. The official rate is 55.

The pound stood at 75 on the parallel market when Bashir left in April 2019.

Even some of Hamdok's triumphs have their downside. A much vaunted peace deal with rebel groups last month involved a promise of government positions for some of those insurgents and funding, pledges that will strain state budgets further.

"It's a massive expansion of government expenditures," said Sudan analyst Magdi El-Gizouli. Meanwhile key exports, such as cattle to the Gulf, are declining because the haj pilgrimage where cattle are slaughtered has been downsized due to the coronavirus, El-Gizouli said, and agricultural production has been hit by a lack of fuel.

"We are in collapse right now. There is nothing to avert anymore. You have an inflationary crisis. You have a depreciating currency. You have shortages of basic commodities. You don’t even have a proper budget."

The government has been blaming manipulation by opponents of the revolution that ousted Bashir. They declared a "state of economic emergency" on Thursday and launched special courts to prosecute illegal activities.

The donors who have offered support are demanding costly reforms in return, including a cut-back in popular subsidies.

Soaring food and fuel prices are where the crisis hits hardest for the people in the displacement camps clustered around the edge of the capital.

Such hardships are closely watched in Sudan - it was rising prices that fuelled the protests that led to Bashir's downfall.

For now, Saleha Adam is trying to make ends meet by selling coffee and tea in a market in the centre of Khartoum. But the money she earns is far from enough.

"We are all poor and displaced in my district," she said. "I don't know anyone who gets state support, but we need help to cope."

Deal to normalise ties with Israel stirs opposition in Sudan 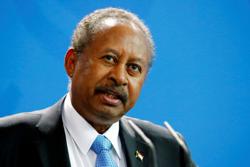