A haze from wildfire smoke lingers over the gutted Medford Estates neighborhood in the aftermath of the Almeda fire in Medford, Oregon, U.S., September 10, 2020. Picture taken with a drone. REUTERS/Adrees Latif

PORTLAND, Ore. (Reuters) - An unprecedented spate of deadly wildfires raging across Oregon kept half a million people under evacuation alert on Friday even as weary firefighters took advantage of improved weather to go on the offensive against the blazes.

The fires have destroyed thousands of homes in days, making Oregon the latest epicenter in a larger summer outbreak of fires sweeping the western United States, collectively scorching a landscape the size of New Jersey and killing at least 25 people.

Although at least five lives were known to have been lost in Oregon this week, Governor Kate Brown has warned the death toll could grow far higher and said on Friday that dozens of people had been reported missing in three counties.

The Pacific Northwest as a whole has borne the brunt of an incendiary onslaught that began around Labor Day, darkening the sky with smoke and ash that has beset northern California, Oregon and Washington with some of the world's worst air-quality levels.

The firestorms, some of the largest on record in California and Oregon, were driven by high winds that howled across the region for days in the midst of record-breaking heat. Scientists say global warming has also contributed to extremes in wet and dry seasons, causing vegetation to flourish then dry out, leaving more abundant, volatile fuel for wildfires.

"This is a climate damn emergency. This is real and it's happening. This is the perfect storm," California Governor Gavin Newsom told reporters from a charred mountainside near Oroville, California.

More than 3,900 homes and other structures have been incinerated in California alone over the past three weeks.

In southern Oregon, an apocalyptic scene of charred residential subdivisions and trailer parks stretched for miles along Highway 99 south of Medford through the neighboring towns of Phoenix and Talent, one of the most devastated areas.

Beatriz Gomez Bolanos, 41, told her four children to close their eyes while fires raged on both sides of their car during their escape from the Bear Creek Mobile Home Park south of Medford, even as embers rained rain down on their house.

"Everything is gone. We have to start again from nothing, but we are alive," Gomez Bolanos told Reuters by phone.

Authorities opened an arson investigation into that fire on Thursday.

Molalla, a community about 25 miles (40 km) south of downtown Portland, was an ash-covered ghost town after its more than 9,000 residents were told to evacuate, with only 30 refusing to leave, the city's fire department said.

The logging town was on the front line of a vast evacuation zone stretching north to within 3 miles (4.8 km) of downtown Portland. The sheriff in suburban Clackamas County set a 10 p.m. PDT (0500 on Saturday GMT) curfew to deter "possible increased criminal activity."

Governor Brown told a news conference that more than 500,000 people were under one of three evacuation alert levels, advising them to pack and be vigilant, to be ready to flee at a moment's notice, or to leave immediately. About 40,000 of those had already been ordered to leave.

In neighboring Washington state to the north, online video from the Tacoma area showed fires in a residential area setting homes ablaze and locals scurrying to warn neighbors.

"Everybody out, everybody out!" a man screamed as firefighters tried to douse the flames.

BREAK IN THE WEATHER

After four days of treacherously hot, windy weather, a glimmer of hope arrived in the form of calmer winds blowing in from the ocean, bringing cooler, moister conditions that helped firefighters make headway against blazes that had burned largely unchecked earlier in the week.

"The weather is going to be favorable for us," said Doug Grafe, fire protection chief for the Oregon Department of Forestry, adding that the break in the weather was forecast to continue into next week.

The overall death toll from the Western fires that began in August jumped to 25 after seven people were reported killed in mountains north of Sacramento, California, and Oregon's fifth fatality was reported in Marion County, outside of Salem, the state capital.

California accounts for the bulk of fire-related deaths, 19 in all, including eight from blazes that began in August and were still burning this week. Washington state reported one this week.

More than 68,000 people were under evacuation orders in California where the largest fire in state history has burned over 740,000 acres (299,470 hectares) in the Mendocino National Forest around 120 miles (190 km) northwest of Sacramento.

"We had four hours to pack up our pets and a few medications and things like that," said retiree John Maylone from an evacuation center in Fresno, California. He was forced to leave three of his 30 cats as he fled the massive Creek Fire.

Paradise, a town blasted by California's deadliest wildfire in 2018, posted the world's worst air quality index reading at 592, according to the PurpleAir monitoring site, as two of the state's largest blazes burned on either side of it. 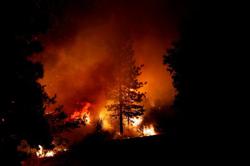