Members of a state investigation team are seen at the Open Russia opposition group's office in this still image taken from CCTV footage obtained by Reuters, in Moscow, Russia September 9, 2020. Tatyana Usmanova - Open Russia/Handout via REUTERS

MOSCOW (Reuters) - Police carried out searches on Wednesday at the Open Russia opposition group's office in Moscow and the homes of several opposition activists running in local elections this weekend, raids that the Kremlin's critics described as intimidation.

The Open Russia group financed by Kremlin critic Mikhail Khodorkovsky said the police searches were taking place as part of an old criminal investigation into Yukos, a defunct oil giant once owned by Khodorkovsky.

Some opposition activists have joined forces to compete in local elections across Russia on Sunday as part of a group called the United Democrats, hoping to get a toehold in regional politics that is dominated by the United Russia ruling party.

Police carried out searches at the group's offices as well as at the homes of seven people in the regions of Vladimir, Ivanovo and Tatarstan who are either competing at the elections or helping with the campaigns, Open Russia said.

Police also searched the editorial office in Moscow of MBKh, a media outlet financed by Khodorkovsky, it said.

"It's obvious the independent candidates and United Democrats' offices are not linked to Yukos, this is an act of pressure and lawlessness from the state in United Russia's interest..." said Anastasiya Burakova, an Open Russia activist.

On Tuesday, an ally of Kremlin critic Alexei Navalny running for the city council in the city of Novosibirsk said an assailant had burst into his group's campaign office and smashed a bottle containing a chemical fluid on the floor.

Russia's treatment of President Vladimir Putin's political opponents has come under international scrutiny since Navalny was airlifted to Germany last month for treatment for what German medics say was poisoning with a rare nerve agent. Russia has said it has seen no solid evidence that he was poisoned. 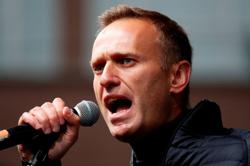