NAIROBI, Sept. 5 (Xinhua) -- The jovial images on his Facebook page, taken from his retail shop or posing with his son and daughter, belie the fact that Philip Cheruiyot Kagongo is the latest Kenyan long-distance runner to be banned for doping.

The Athletics Integrity Unit (AIU) on Sept. 3 published the decision to ban the 36-year-old marathoner from participating in elite races for two years commencing April 31, 2019 to July 31, 2021.

Kagongo was penalized due to the presence of a banned substance Higamine - under article 2.1 of the World Anti-Doping Agency (WADA) code as well as disqualification of the Athlete's results since and including April 28, 2019.

"The athlete has accepted the above consequences for his anti-doping rule violations and has expressly waived his right to have those consequences determined by the Disciplinary Tribunal at a hearing," AIU said in a ruling.

With Kenya grappling with soaring cases of Anti-Doping Rules (ADR) violations, the case of Kagongo, the former Barcelona Marathon winner, has exposed the failings of the country's systems to combat the vice.

According to AIU, Kagongo who has the right to appeal the ban was first notified that his urine A-sample collected in in-competition testing at the PZU Cracovia Marathon in Poland on April 28, 2019 had tested positive for the banned substance on June 6, 2019.

He did not contest the findings or request for his B-sample to be tested for Higenamine, which is a specified substance banned at all times, in his reply to the AIU two days later.

"The athlete stated that he did not dope intentionally and suspected that the origin of the Higenamine in the sample might have been a contaminated supplement," AIU said in its verdict report.

This was a departure from most of his compatriots who have been notified of ADRs in their system, with Kagongo going ahead to provide additional details regarding the supplements he had used prior to the Cracovia Marathon between June 11 and July 13, 2019.

The athlete further provided the AIU with details regarding herbs that he had consumed upon his mother's advice prior to the Cracovia Marathon.

The federation agreed to assist him identify the herbs and determine whether they were responsible for the banned substance entering his body.

With more than 60 Kenyan athletes sanctioned for doping offenses so far, lack of proper mechanisms to tackle the vice remains the biggest threat to cleaning up the sport as additional runners continue to be caught up in the doping web.

By admitting the presence of a doping agent and turning to the local governing body, Kagongo had hoped he would be exonerated from the charges facing him and spare his motherland embarrassment.

He alleged that he had been forced to sign a document indicating he had doped and AIU was negotiating with him to admit to the ADR and face a shortened ban.

Kagongo could not afford legal services and the AIU proposed that he seek advice via the pro bono legal service offered by the Disciplinary Tribunal secretariat, Sport Resolutions, to ensure that he fully understood the nature of the charge.

It follows that AK, whose leadership has been vocal with threats of dire consequences for athletes caught cheating, has yet to establish a department to deal with doping cases despite the soaring cases.

With no legal representation or the services of professional medics to fall back on at the federation level, Kenyan athletes accused of ADRs are often left to fight charges themselves or use lawyers paid for by the AIU.

Often, once charge notices are issued, most of the foreign Athletes' Representatives or agents who enter these runners in races are quick to distance themselves from the athletes concerned, further compounding the problem.

While no one can absolve the accused runners from blame, the fight against doping in the country, spearheaded by the under-funded and ill-equipped Anti-Doping Agency of Kenya (ADAK) seems to be achieving little.

ADAK and AK have co-operated in organizing a string of seminars and workshops aimed at sensitizing local athletes against the dangers of doping.

However, since 2016 when ADAK was formed and given legal force to prosecute doping offenders, not a single case has been successfully prosecuted despite the rising numbers of banned athletes.

Under current Kenyan law, a jail term of up to three years for support staff found guilty in connection with doping, but not for athletes is recommended and the country's Sports Ministry cabinet secretary Amina Mohamed said in June the government will pass legislation to criminalize doping.

But as the case of Kagongo highlights, something as basic as identifying herbs alleged to have been the cause of a banned substance entering the system of an athlete remains beyond the capacity of existing mechanisms in place to combat doping. 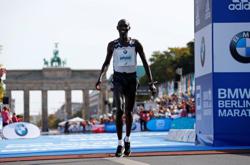