Macron: France to step up security for its citizens in Africa's Sahel region

"We will do everything we can to support the families of the victims and to respond to the attack that cost the lives of six of our compatriots and two Nigeriens. These six young people, who were members of the NGO 'ACTED', showed extraordinary commitment to the local population," Macron tweeted.

"I have decided to step up security measures for our citizens in the region. We will continue in our action to eradicate the terrorist groups, with the increased support of our partners." 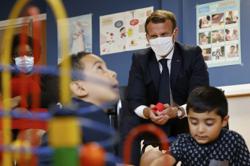