HONG KONG -- The Liaison Office of the Central People's Government in the Hong Kong Special Administrative Region (HKSAR) said Sunday that the recent so-called U.S. sanctions against Chinese officials will eventually become the laughingstock of the world.

The hegemonic acts of the United States have drawn widespread, strong condemnation in Hong Kong and have been considered bullying and unreasonable by the mainstream public opinion, a spokesperson of the liaison office said in a statement. (Hong Kong-U.S.-Sanctions)

The accident occurred during a bad weather on Saturday evening when six policemen were conducting a patrol on the Pulau Tibi waters, Chief of the Waters and Air Police Corps of the Indonesian Police, Inspector General Lotharia Latif told Detiknews on Sunday. (Indonesia-Boat-Sink)

According to the official, an explosive device planted inside a handcart exploded at around 4:00 p.m. local time in Kampani locality at Police District 5, killing two civilians including a woman and injuring five security personnel. (Afghanistan-Bomb)

Senior Health Ministry official Nasima Sultana told a briefing on Sunday that 34 deaths were reported in the last 24 hours across Bangladesh. (Bangladesh-COVID19)

TOKYO -- Nagasaki City in Japan commemorated the 75th anniversary of the U.S. atomic bombing on Sunday, with about 500 people and representatives from some 70 countries and regions attending the annual memorial ceremony.

The ceremony was held at the Peace Park and the number of participants this year was roughly one-tenth of the usual number to avoid crowding as COVID-19 continues to spread across the country. Meanwhile, there were no seats for the public to prevent further infections. (Japan-Nagasaki-Anniversary)

NEW DELHI -- India's total COVID-19 tally rose to 2,153,010 and the number of deaths surged to 43,379, according to the latest data issued by the federal health ministry on Sunday. 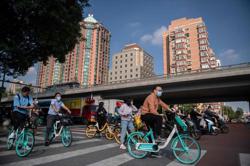