Across China: Villagers relocate as floodwater spills from freshwater lake in east China

HEFEI, July 26 (Xinhua) -- Hu Maoshan was ready to move when there was knee-deep floodwater in his house.

"We stored everything on the second floor," said Hu, 83. "I only took along a few important items."

Hu lives in Jianggang Village in the county of Feixi, east China's Anhui Province. The village sits next to an embankment along the Fengle River, a tributary of Chaohu Lake, China's fifth largest freshwater lake.

"The water spilled out of the embankment on July 21 and flowed into the village," he said. "We knew we had to leave."

Authorities in Anhui on Saturday announced that 12 cities in the province had entered the emergency period of flood control from noon as continuous downpours wreaked havoc across vast stretches of the country.

The 12 cities on the banks of the Yangtze River, Huaihe River and Chaohu Lake include Hefei, Bengbu and Wuhu, according to the provincial flood control and drought relief headquarters.

Currently, the main courses of the Yangtze River and Huaihe River in Anhui have been flowing above warning levels, and the water in Chaohu Lake is at its highest mark in history, the headquarters said.

As floodwater gushed into his house, Hu and his wife Wang Xiaolan, 81, carried their clothes, cooking devices and other appliances to the second floor. They spent a night there and moved to their daughter's house the next day.

"We moved basically empty-handed," Hu said. "Some villagers moved out by boat."

Some villagers brought with them their family photos, because the pictures symbolize reunion, they said.

More than 100 residents of Jianggang Village have relocated to the houses of their relatives or friends.

The old couple walked about 5 km to escape the floods in their daughter's house in the village of Sanyuan.

Only a few days after their arrival, they had to move yet again.

As water rose beyond the warning level at the Chaohu Lake, authorities have decided to turn the area near Sanyuan Village into a buffer zone for the floodwater.

"We plan to move to a temporary shelter about 600 meters away from my daughter's house," Hu said.

Authorities have arranged four schools as temporary shelters for local villagers living in the vicinity, with basic life necessities provided. In the Suxiao Primary School, for example, instant noodles, bottled water and quilts have been prepared.

"We live by water, so we are used to the floods," Hu said, adding that his family has relocated before.

"If they don't release the floodwater, the water will inundate more areas, so we understand," he said.

To make up for lost farmland, authorities will allocate subsidies to villagers like Hu.

"This is only temporary," Hu said. "We will return to our home when the flood retreats." 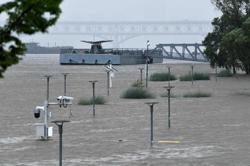 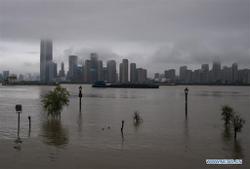