Up for bidding - an online date with Keanu Reeves

LOS ANGELES (ANN): Fans of Keanu Reeves, 55, can bid for the chance to go on an online date with the actor.

The star of movies such as John Wick (2014) and Speed (1994) is auctioning a 15-minute call over video conferencing platform Zoom to the highest bidder.

Proceeds will go to Camp Rainbow Gold, a non-profit organisation based in Idaho in the United States that runs camps for children with cancer and their families.

"This is truly priceless and now you have the chance to Zoom with him from home," reads a description on the auction page.

Organisers say the Zoom call must take place during the week of July 6 this year and based on mutually available dates and times.

Other celebrity items on auction include a 15-minute private concert with American singer Ally Brooke of Fifth Harmony fame and an acoustic guitar autographed by singer-songwriter Andy Grammer.

Bidding for the Zoom date with Reeves closes on Monday (June 22).

The actor, who is dating artist Alexandra Grant, has been donating to cancer charities in recent years. – The Straits Times/Asia News Network 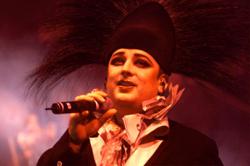