MOSCOW (Reuters) - Russian President Vladimir Putin said on Monday a nationwide vote on constitutional reforms will be held on July 1, announcing a new date for a delayed ballot that could extend his rule until 2036.

Putin postponed the original vote, which had been set for April 22, because of the coronavirus outbreak, saying the health and safety of citizens was his top priority as the global coronavirus pandemic worsened.

But he told a government meeting on Monday that the situation had broadly stabilised and the vote could go ahead.

The number of coronavirus infections in Moscow has dropped sharply, he said, allowing the capital to start easing some restrictions.

The changes that Russians will vote on, already approved by parliament and Russia's Constitutional Court, would reset Putin's presidential term tally to zero, allowing him to serve two more back-to-back six year terms until 2036 if reelected.

"I really hope the country's citizens will take part actively in the vote on the amendments to the constitution," Putin, whose current term ends in 2024, told a televised government meeting.

Critics have dismissed the vote as a constitutional coup which they fear will be rigged and urged voters to stay away or to reject the proposed changes. 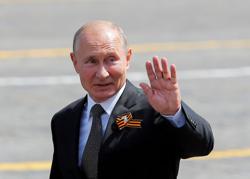