A worker uses a thermometer to check the temperature of a customer as he enters a Starbucks shop as the country is hit by an outbreak of the new coronavirus, in Beijing, China January 30, 2020. REUTERS/Carlos Garcia Rawlins

Companies have shut thousands of stores, restricted travel to China and asked staff there to work from home.

Here's what large companies have said about the outbreak:

**Facebook suspended non-essential travel to mainland China and told employees who had travelled there to work from home.

**Tiktok owner Bytedance asked employees who travelled during the holidays to quarantine themselves at home for 14 days. E-commerce firm Pinduoduo and UBS Group

**Samsung Electronics <005930.KS>, which has chip, display and home-appliance plants in China, extended a suspension of some factories in line with government guidance. It had earlier advised employees who visited Hubei to stay at home for seven days.

**IKEA closed all its 30 stores in China. It has restricted China travel.

**American Airlines, the largest U.S. carrier, said it will suspend flights from Los Angeles to Beijing and Shanghai.

**Cathay Pacific <0293.HK> and Cathay Dragon will cut capacity to and from mainland China by half or more from Jan. 30 to end-March.

**Ctrip, China's largest online booking platform, said more than 300,000 hotels on its platform had agreed to refunds on bookings between Jan. 22 and Feb. 8. Refunds also include flight tickets, cruises and car rentals. 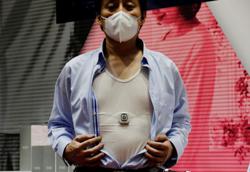