Victoria Beckham's son reportedly dating model who looks like her

Brooklyn, the eldest son of Victoria and former English football superstar David Beckham, is reportedly dating model Phoebe Torrance after breaking off with another model, Hana Cross, two months ago.

Brooklyn, 20, and Cross, 22, were involved in a nine-month high-profile relationship, with several reported bust-ups between them. Fans had commented that Cross bore a striking resemblance to Victoria, now a fashion designer.

British tabloid The Sun reported that Brooklyn and Torrance, 25, have gone out on a few dates and were recently seen with their arms around each other at a private club in London.

The newspaper quoted a source as saying the couple moved in the same social circle and have known each other for quite a while. Torrance's father is former Scottish professional golfer Sam Torrance.

According to The Sun, some of Brooklyn's friends are teasing him that his latest girlfriend looks like his mother.

"Bizarrely though, from a certain angle, she does look terrifyingly like his mother, Victoria," the source said.

However, The Sun said Brooklyn has squashed talks of an Oedipus complex - where a son secretly covets his mother - even though Torrance has told her friends she had done jobs as a Victoria lookalike during her earlier modelling days.

According to the Daily Mail, she is well liked by the Beckham family and follows Brooklyn's brother, Romeo, 17, on Instagram. 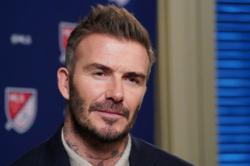