PARIS (Reuters) - France must develop a "society of vigilance" in its fight against the "Hydra" of Islamist militancy, President Emmanuel Macron said on Tuesday, as he paid homage to the victims of a deadly knife attack at the headquarters of the Paris police.

The assailant, an IT worker at the premises, killed three police officers and an administrative worker with a knife last week, before being shot dead by police.

Initial investigations have revealed that the Martinique-born man, a convert to Islam, had contacts with individuals likely to belong to an Islamist Salafist movement, according to prosecutors.

"The administrative services alone, and all the combined services of the state alone, will not be able to overcome the Islamist 'Hydra'," said Macron, during the sombre ceremony held in pouring rain at the police headquarters near Notre Dame Cathedral.

"It's up to the entire nation, which needs to unite, mobilise and be ready to act," added Macron, who said France needed to develop a "society of vigilance" where everyone was looking out for any signs of people at risk of being influenced by Islamist extremist networks.

Macron's reference to the Greek mythological monster of the "Hydra" conveyed an image of a threat springing up from multiple sources. 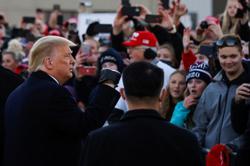 In final days of campaign, Trump criticizes those fighting coronavirus