PETALING JAYA: Suspected Christchurch shooter Brenton Tarrant claims he decided to carry out the attack "to fight the invaders in New Zealand".

In a 73-page manifesto, believed to be written by him, Tarrant said the birth rates in Europe were declining, claiming that it would be mass immigration and the higher fertility rates of immigrants that would increase the population.

Labeling these immigrants as a "white genocide", Tarrant wrote in the manifesto entitled The Great Placement: Towards A New Society that "we must crush immigration and deport those invaders already living on our soil. It is not just a matter of our prosperity, but the very survival of our people."

The manifesto starts of with Welsh poet Dylan Thomas' poem "Do not go gentle into that good night".

In the section of the manifesto under the heading "Why did you carry out the attack?", Tarrant wrote down several reasons for his action, including:

"To take revenge on the invaders for the hundred of thousands of deaths caused by foreign invaders in European lands throughout history.

"To incite violence, retaliation and further divide between the European people and the invaders currently occupying European soil.

"To directly reduce immigration rates to European lands by intimidating and physically removing the invaders themselves."

Tarrant said he was a 28-year-old Australian working part-time as a "kebab removalist".

"I am just a regular white man, from a regular family who decided to take a stand to ensure a future for my people," he added.

While stating that he was not a direct member of any political groups or movement, Tarrant also claimed he represented "millions of European and other ethno-nationalist peoples who wished to live in peace amongst their own people."

Tarrant also livestreamed the shooting incident at the mosque in Christchurch, where he gunned down several Muslims who were praying.

"We must ensure the existence of our people, and a future for white children," he wrote. 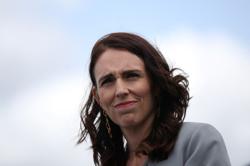