GAZA (Reuters) - Palestinian leaders struck discordant notes on how to deal with Israel on Saturday as parliament met to usher in a unity government intended to halt factional fighting and ease a crippling Western aid embargo.

President Mahmoud Abbas stressed the search for peace, while Prime Minister Ismail Haniyeh of the Islamist Hamas movement said the new coalition government upheld the right to "all forms" of resistance against Israel.

Israel again ruled out dealing with the new government, citing Hamas's refusal to accept demands, set by a Quartet of foreign peace mediators a year ago, that it forswear violence, recognise the Jewish state, and accept past interim peace deals.

But with international impatience mounting over the diplomatic impasse, Fatah-Hamas violence and deepening Palestinian poverty, there have been signs of Western flexibility on talking to non-Hamas members of the new cabinet.

"This national unity wedding has received an Arab and international welcome, which we hope will be transformed into practical steps to end the siege," Abbas told lawmakers.

Abbas, who heads the Palestine Liberation Organisation, reiterated his endorsement of an Arab League plan that offers full peace with Israel if it withdraws from all the territory it occupied in the 1967 Middle East war.

"The government affirms that resistance in all its forms, including popular resistance to occupation, is a legitimate right of the Palestinian people," he said. "Our people have the right to defend themselves from continuous Israeli aggression."

Eighty-seven of the 132 Palestinian Legislative Council's members gathered in Gaza and Ramallah in a video-linked session. Forty-one lawmakers, including 37 from Hamas, could not attend because they are in Israeli jails. Israeli travel curbs prevented all the PLC members from meeting in a single venue.

Haniyeh spoke ahead of a confidence vote seen as a formality given the combined strength of Fatah and Hamas.

The coalition's future may hang on whether it can erode the foreign boycott of the aid-dependent Palestinian Authority, which has been unable to pay its employees in full for a year.

The Quartet -- the United States, the European Union, Russia and the United Nations -- suspended direct aid to the government after Hamas beat Fatah in elections and took power last March.

The United States is expected to continue its boycott, but a U.S. official said on Friday that Washington would leave the door open to unofficial contacts with Finance Minister Salam Fayyad, an independent with strong reformist credentials.

France has invited new Foreign Minister Ziad Abu Amr to Paris, and Britain plans to allow diplomatic contacts with ministers not from Hamas.

Palestinians hope the new government will halt internal fighting and restore law and order, especially in Gaza, where repeated clashes between rival security forces have killed more than 90 people since December.

Dozens of Palestinian journalists demonstrated outside in protest at the captivity of their Gaza-based BBC colleague Alan Johnston, a Briton seized by kidnappers on Monday.

The Saudi-brokered accord reached by Hamas and Fatah on Feb. 8 pledged "respect" for past peace deals with Israel.

Even though those agreements were intended eventually to create a Palestinian state alongside Israel, Hamas says it will never recognise the Jewish state's right to exist.

Hamas officials say the Islamist movement will back the government's political agenda only as a "transitional" phase.

"We believe in liberating our land gradually," senior Hamas lawmaker Mushir al-Masri told Reuters. "Any transitional agenda that deals with gradual achievement of our goals on the basis of constant rights is one we can favour." 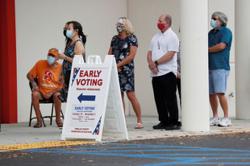 US on brink of rampant coronavirus spread, Europe hospitals strained